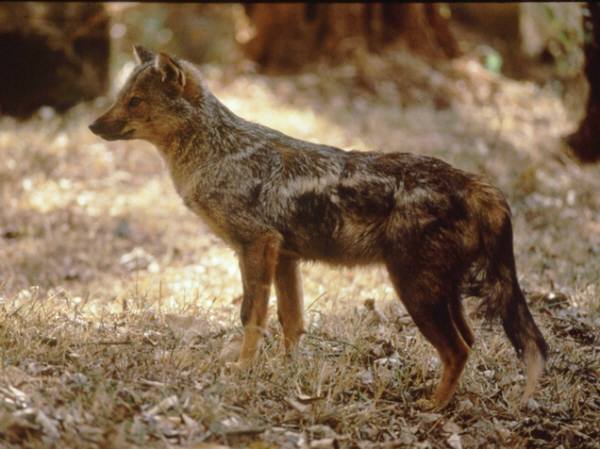 The Side-striped Jackal occurs in West, Central and southern Africa. Regional estimates of abundance are not available, but from work undertaken in two diverse habitats in Zimbabwe, it seems reasonable to assume the species is common and to estimate a total population in excess of three million. It is likely that the population is at least stable. This species' dietary flexibility and ability to co-exist with humans on the periphery of settlements and towns suggests that populations are only vulnerable in cases of extreme habitat modification or intense disease epidemics. 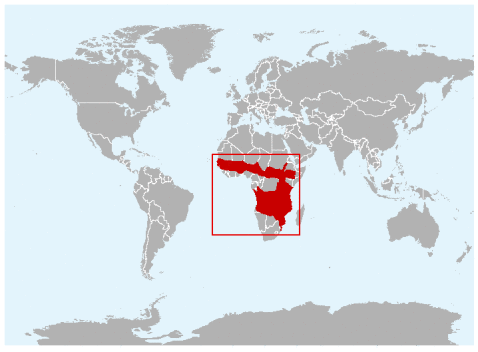 Side-striped Jackals occupy a range of habitats, from game areas through farmland to towns within the broad-leaved savanna zones, including wooded habitats, bush, grassland, abandoned cultivation, marshes and montane habitats up to 2,700 m (Kingdon 1977, 1997; Estes 1991). The species tends to avoid very open savanna (although Rowe-Rowe (1992) mentions they occur in open grassland in north-eastern KwaZulu-Natal), thickly wooded areas and arid zones (Stuart and Stuart 1988; Skinner and Smithers 1990; Kingdon 1997), but Kingdon (1997) states that it enters the equatorial forest belt in the wake of human settlement. Side-striped Jackals frequently occur near rural dwellings and farm buildings (Skinner and Smithers 1990; Kingdon 1997), and penetrate peri-urban and urban areas (Liebenberg 1990; Skinner and Smithers 1990). In Botswana, Smithers (1971) recorded them where mean annual rainfall was 400–700 mm, and many authors note that the species occurs in well-watered areas (e.g., Kingdon 1977; Skinner and Smithers 1990). Where Side-striped Jackals occur sympatrically with other jackal species, they may avoid competition by ecological segregation (Fuller et al. 1989). In such areas of sympatry, Side-striped Jackals usually occupy areas of denser vegetation, while Black-backed and Golden Jackals dominate in the more open areas (Loveridge 1999; Loveridge and Macdonald 2003).