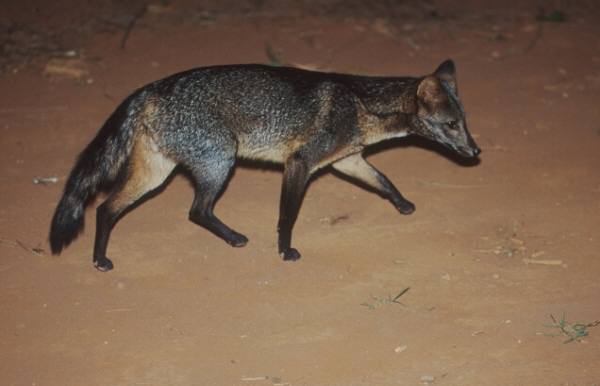 This species is listed as Least Concern as the Crab-eating Fox is relatively common throughout its range, occupying most habitats and although no estimates of population sizes are available, populations generally are considered stable.

This species is relatively common throughout its range from the coastal and montane regions in northern Colombia and Venezuela, south to the provinces of Entre Ríos and adjacent northern Buenos Aires, Argentina (35°S); and from the eastern Andean foothills (up to 2,000 m asl) in Bolivia and Argentina (67°W) to the Atlantic forests of east Brazil. Its known central distribution in lowland Amazon forest is limited to areas northeast of the Rio Amazon and Rio Negro (2°S, 61°W), southeast of the Rio Amazon and Rio Araguaia (2°S, 51°W), and south of Rio Beni, Bolivia (11°S). Tejera et al. (1999) recorded the first documented evidence from Panama, and since then additional records have come to light from elsewhere in the eastern part of the country. In recent years, range extensions have been documented in Venezuela (Hladik-Barkoczy 2013), Brazil (de Thoisy et al. 2013), Argentina (Fracassi et al. 2010) and Colombia (Ramírez-Chavez and Pérez 2015; these authors also commented on presence in Ecuador).

The only population density estimate was produced in a coastal area of southern Brazil. Based on live capture-recapture data, a density of 0.78 individuals/km2 was estimated over an area of 8.9 km2 (Faria-Corrêa et al. 2009). No precise estimates of total population sizes are available, but populations generally are considered stable.

Vegetative habitats are generally utilized in proportion to abundance, varying with social status and climatic season. Radio-tagged foxes in seasonally flooded savannas of Marajó, Brazil, predominated in wooded savanna (34%) and regeneration scrub (31%); low-lying savanna was "avoided", and areas of wooded savanna "preferred", more by senior than junior foxes and more in the wet season than dry season (Macdonald and Courtenay 1996). In the central llanos of Venezuela, fox home ranges similarly shift to higher ground in response to seasonal flooding, though are generally located in open palm savanna (68% of sightings) and closed habitats (shrub, woodlands, deciduous forest, 32%; Brady 1979, Sunquist et al. 1989). In Minas Gerais, Brazil, two radio-tagged foxes (one male, one female) in different territories were observed most often at the interface of livestock pasture and gallery forest ("vereidas"; 82%) and in eucalyptus/agricultural plantations (8%; Courtenay and Maffei 2004). In Saõ Paulo state, Brazil, although 42.9% of presence records were at less than 100 m from forest fragments, its occurrence was not related to any specific landscape variable (de Barros Ferraz et al. 2010). Similarly, in a protected area located in the southernmost part of Brazil (Rio Grande do Sul state) it was observed in all sampled habitats (Faria-Corrêa et al. 2009). Crab-eating Foxes were more frequently recorded in the thicker habitats, the gallery forests and the shrubland without cattle, in the Iberá wetlands of northeastern Argentina (Di Bitetti et al. 2009). Eighty-eight Crab-eating Fox specimens collected by the Smithsonian Venezuelan Project were taken from prairie and pasture (49%), deciduous and thorn forest (19%), evergreen forest (17%), and marshes, croplands and gardens (15%; Handley 1976 as cited in Cordero-Rodríguez and Nassar 1999).

This species is of no direct commercial value as a furbearer due to the unsuitability of the fur which is coarse and short; however, pelts are sometimes traded as those of the South American Grey Fox in Argentina, and as those of the latter species and the Pampas Fox in Uruguay (Cravino et al. 1997, Courtenay and Maffei 2004). Current illegal trade is small as the probable consequence of low fur prices; in Paraguay, for example, no illegal fox pelts were confiscated from 1995 to 2000 (Courtenay and Maffei 2004).

Legislation
It is listed on CITES – Appendix II. In Argentina, the Crab-eating Fox was considered "not endangered" by the 1983 Fauna and Flora National Direction (resolution 144), and its exploitation and commercial use was forbidden in 1987 (Courtenay and Maffei 2004). There is no specific protective legislation for this species in any country, though hunting wildlife is officially forbidden in most countries. Generally, there is no specific pest regulatory legislation for the Crab-eating Fox, but it is strongly disliked locally as a pest of livestock (poultry and lambs) leading to illegal hunting and consequential sales of pelts. In some countries, pest control is limited by specific quotas (without official bounties), although the system is often ignored, abused, or not reinforced (Courtenay and Maffei 2004). In Uruguay, hunting permits have not been issued since 1989 on the basis that lamb predation by foxes is negligible (Cravino et al. 1997, 2000).

Presence in captivity
It is apparently present in many zoos and private collections throughout South America where it generally breeds well.

Gaps in knowledge
Little is known of the population status of this species in lowland Amazon forest.