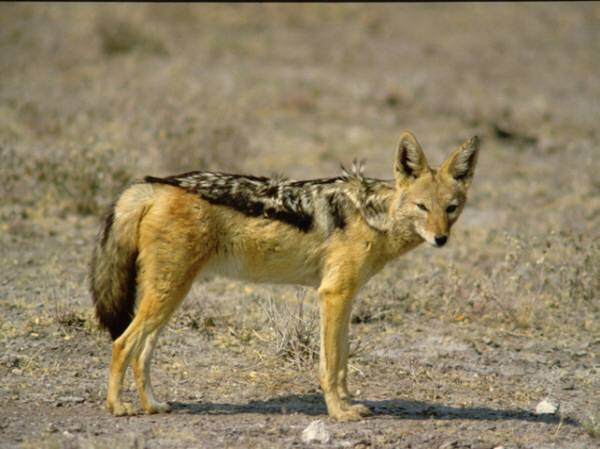 The Black-backed Jackal is endemic to Africa, found in two separate subpopulations: one in East Africa; and one in southern Africa. The species is generally widespread. Black-backed Jackals are relatively unspecialized canids and well suited for an opportunistic lifestyle in a wide variety of habitats. The species is persecuted for its role as livestock killers and as rabies vectors. However, population control efforts appear largely ineffective and probably only succeed in producing a temporary reduction in local numbers.

The Black-backed Jackal is endemic to Africa. This species has a disjunct distribution range, and is found in two separate populations, one in East Africa and the Horn, and the other in southern Africa. Ansell (1960) notes that this species is entirely absent from Zambia and it is absent through much of central and equatorial Africa. The disjunct distribution of this species is similar to that of other endemic African species adapted to dry conditions (e.g., Aardwolf Proteles cristatus and Bat-eared Fox Otocyon megalotis). The two Black-backed Jackal ranges are separated by as much as 1,000 km and their discontinuous distribution suggests that regions of dry Acacia bush and savanna, the preferred habitat of this species, once connected south-west Africa and the Horn of Africa.

Fossils of Black-backed Jackals have been found in deposits in South Africa dating to at least two million years ago (Hendey 1974), but fossil remains have never been found north of Ethiopia suggesting that they have always been restricted to sub-Saharan Africa. 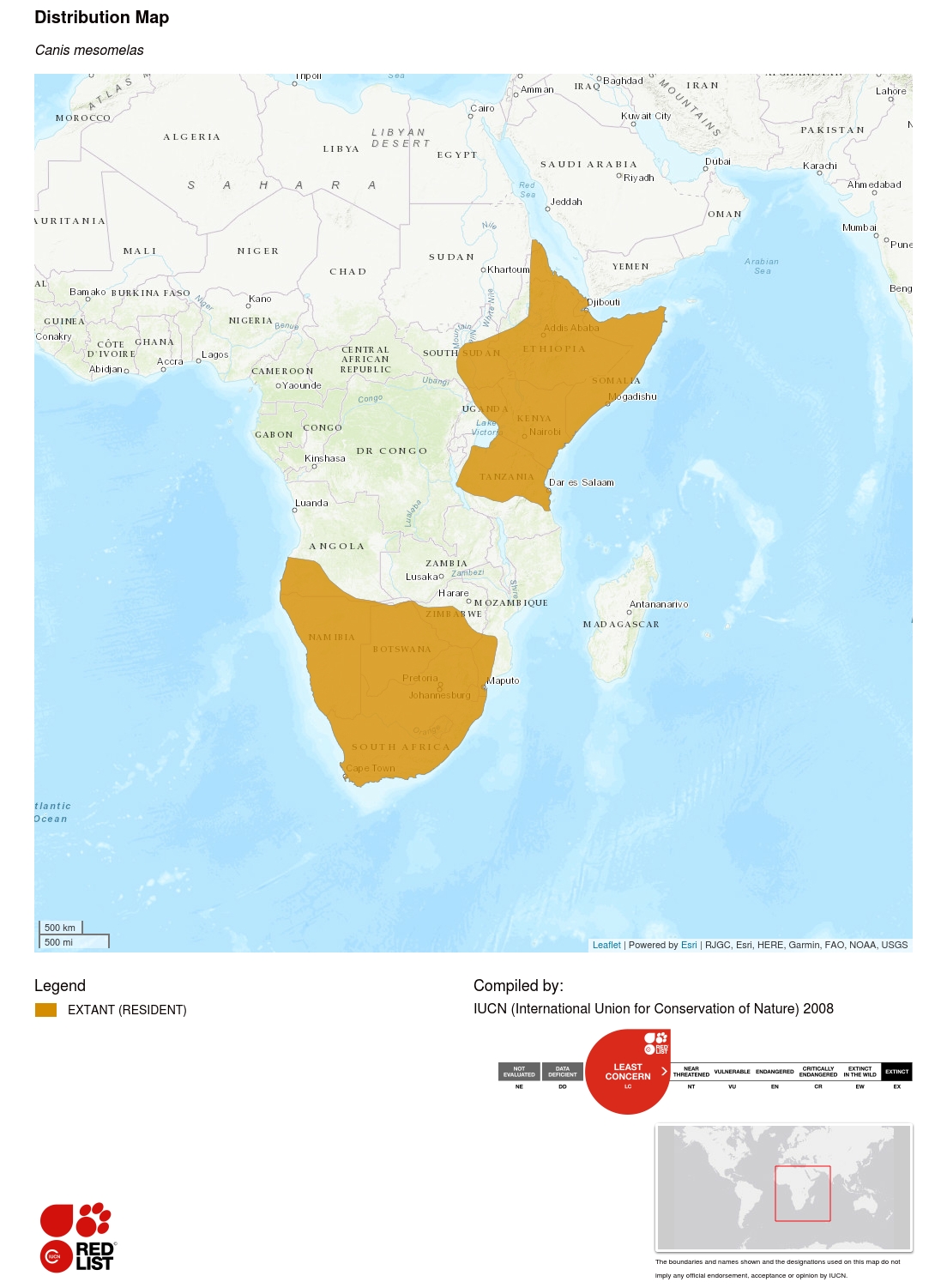 Black-backed Jackals are generally widespread and, in Namibia and South Africa, they are common in protected areas where suitable habitat occurs. They occur in many livestock producing areas, where they are considered vermin, but despite strenuous control measures in many farming areas of southern Africa remain relatively abundant.

Black-backed Jackals are found in a wide variety of habitats including arid coastal desert (Dreyer and Nel 1990), montane grassland (Rowe-Rowe 1982), open savanna (Wyman 1967, Kingdon 1977, Lamprecht 1978, Moehlman 1983, Fuller et al. 1989, Estes 1991), woodland savanna mosaics (Smithers 1971, Loveridge and Macdonald 2002) and farmland. In general, Black-backed Jackals show a preference for open habitats tending to avoid dense vegetation (Pienaar 1969). In KwaZulu-Natal, they are recorded from sea level to more than 3,000 m asl. in the Drakensberg, and in localities receiving more than 2,000 mm of rainfall (Rowe-Rowe 1982, 1992); they have been recorded from the alpine zone of Mt Kenya at 3,660 m (Young and Evans 1993). Where more than one jackal species occur in sympatry the habitat is partitioned. The trend is for Black-backed Jackals to use preferentially either the open grassland (when sympatric with Side-striped Jackal; Loveridge 1999) or wooded savanna (when sympatric with Golden and Side-striped Jackals; Fuller et al. 1989). In western Zimbabwe, habitat partitioning was mediated by aggressive encounters in which Black-backed Jackals displaced Side-striped Jackals from grassland habitats (Loveridge 1999).

There are no major threats to the species. Black-backed Jackals are persecuted for their role as livestock killers and as rabies vectors (Black-based Jackals are very susceptible to rabies, and are responsible for transmission of the disease to domestic stock). However, population control efforts appear largely ineffective and probably only succeed in producing a temporary reduction in local numbers. In any case, rabies in jackals may be better controlled through oral vaccination techniques, and through immunization of domestic dogs, than by culling (Loveridge and Macdonald 2001).

There is no significant trade in jackal products, although body parts are used in traditional African medicine and clothing.

The species is not included in the CITES Appendices and has no legal protection outside protected areas. It is known to occur in many protected areas throughout its range.

Black-backed Jackals have been maintained in captivity for use in experiments testing rabies vaccine (Bingham et al. 1995), but are otherwise not a common species in conservation breeding programmes.

A large amount of research focusing on the behaviour and ecology of this species has been undertaken, particularly in the last 25 years. In the last decade, however, the emphasis has generally shifted to the role that the animal plays as a vector of rabies, and as a problem animal. The study of Loveridge (1999), for example, directed efforts towards better understanding their role in disease transmission and livestock predation, while ecological, behavioural and other data are gathered concurrently. In many settled areas this species, together with the Caracal Caracal caracal, represent the top predators in many ecosystems, yet their roles are poorly understood.