The Culpeo is distributed from the Andes and hilly regions of South America, ranging down to the Pacific shoreline in the desert of northern Chile. Culpeos appear to withstand intense hunting levels and still maintain viable regional populations. When hunting pressure is reduced, populations usually can recover quickly. The species is not considered threatened. 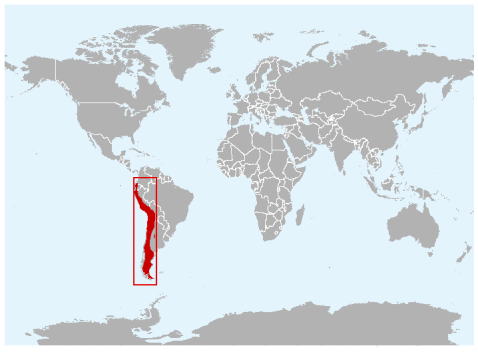 Throughout its wide distribution, the Culpeo uses many habitat types ranging from rugged and mountain terrain up to the tree line, deep valleys and open deserts, scrubby pampas, sclerophyllous matorral, to broad-leaved temperate southern beech forest in the south. The Culpeo uses all the range of habitat moisture gradients from the driest desert to the broad-leaved rainforest. In the Andes of Peru, Chile, Bolivia and Argentina, the culpeo reaches elevations of up to 4,800 m (Redford and Eisenberg 1992; Romo 1995; A.J. Novaro et al. unpubl.; J.E. Jiménez, pers. obs.). Redford and Eisenberg (1992) placed the Culpeo in the coldest and driest environments of South America relative to other South American canids.

Main threats to Culpeos have been hunting and trapping for fur (although trade has decreased in the last decade) and persecution to reduce predation on livestock and poultry. Habitat loss does not appear to be an important threat to this species. Predation by feral and domestic dogs may be important in some areas (Novaro 1997b).