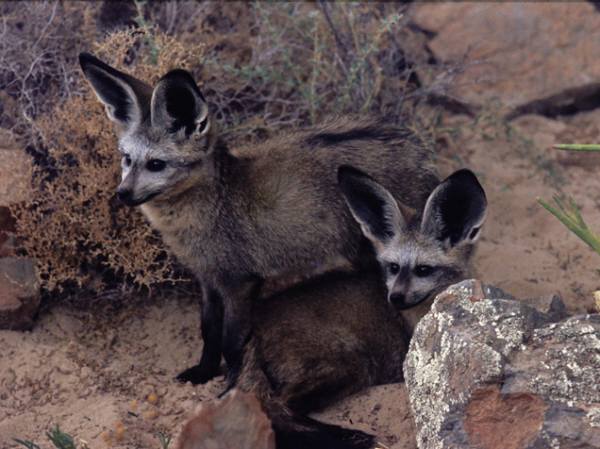 The Bat-eared Fox occurs in two discrete subpopulations in eastern and southern Africa. The species is common in conservation areas, becoming uncommon in arid areas and on farms in South Africa where they are occasionally persecuted. Currently not considered threatened. 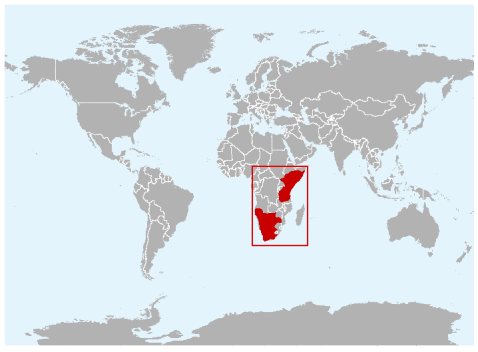 In southern Africa, the prime habitat is mainly short-grass plains and areas with bare ground (Mackie and Nel 1989), but they are also found in open scrub vegetation and arid, semi-arid or winter rainfall (fynbos or Cape macchia) shrub lands, and open arid savanna. The range of both subspecies overlaps almost completely with that of Hodotermes and Microhodotermes, termite genera prevailing in the diet (Mackie and Nel 1989; Maas 1993a). In the Serengeti, they are common in open grassland and woodland boundaries but not short-grass plains (Lamprecht 1979; Malcolm 1986); harvester termite (H. mossambicus) foraging holes and dung from migratory ungulates are more abundant in areas occupied by bat-eared foxes, while grass is shorter and individual plants are more widely spaced (Maas 1993a).

In southern Africa the primary threats are hunting for skins or because they are perceived as being predators of small livestock. Commercial use is very limited, but winter pelts are valued and sold as blankets. They are also sold as hunting trophies in South Africa. Populations fluctuate due to disease or drought.