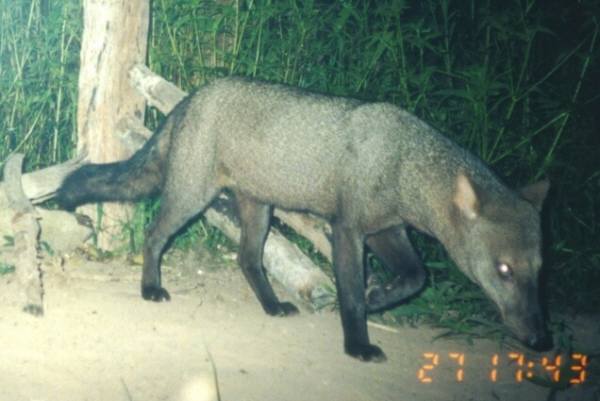 Although widespread, this species is rare and sightings are uncommon across its range. Although there are indications that the population may be recovering in some areas, with increasing numbers of sightings in recent years, this also reflects a greater number of biologists and tourists in the region and improvements in detection technology such as the use of camera-traps. Given the growing threats of habitat loss (especially due to large-scale conversion currently underway in Amazonia, especially for soybean production), prey-base depletion, and disease transmission from domestic dogs, it is inferred that the species has declined in the region of 20–25% over the past 12 years (estimated generation length = 4 years). The species is therefore listed as Near Threatened, based on approximating listing as Vulnerable under criterion A2.

The Short-eared Dog has been found in scattered sites from Colombia to Bolivia and Ecuador to Brazil. Its presence in Venezuela was suggested by Hershkovitz (1961) but never confirmed. Various studies have suggested the presence of the species throughout the entire Amazonian lowland forest region, as well as Andean foothill forests in Ecuador and Peru up to 2,000 m (Emmons and Feer 1990, 1997; Tirira 1999; A. Plenge pers. comm. 2002).

The Short-eared Dog favours undisturbed rainforest in the Amazonian lowlands. The species has been recorded in a wide variety of lowland habitats, including terra firme forest, swamp forest, stands of bamboo, and primary succession along rivers. At Cocha Cashu, sightings and tracks of the species are strongly associated with rivers and creeks, and there are five reliable reports of Short-eared Dogs swimming in rivers. Records are very rare in areas with significant human disturbance, i.e., near towns or in agricultural areas. It is unclear whether the Short-eared Dog is able to utilize habitats outside wet lowland forests. One sighting in Rondonia, Brazil, was in lowland forest bordering savanna (M. Messias pers. comm.). The species has also been recorded up to 2,000 m elevation in montane forest on ridges adjacent to lowlands.

In an ongoing field study initiated in Madre de Dios, Peru in 2000, a female tracked for one year used an area of 8 km² and a dispersing male 30km² in 3 months. Preliminary evidence suggests that male territories probably do not overlap (M.R.P. Leite Pitman pers. obs.).

The major threats to this species are habitat loss (especially due to large-scale conversion currently underway in Amazonia), prey-base depletion from hunting, and diseases. There are no reports of widespread persecution of the species.