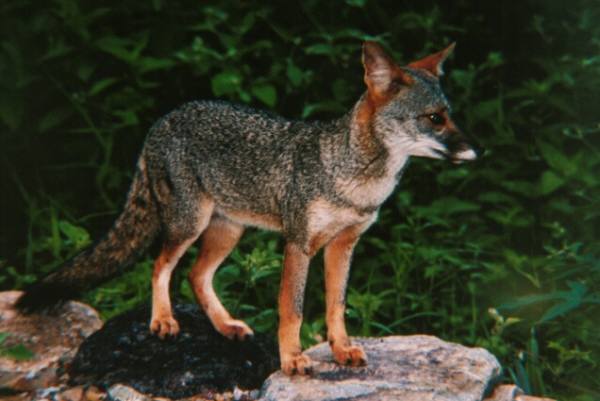 Several recent molecular studies have provided support for a monophyletic assemblage of South American endemic canids (Lindblad-Toh et al. 2005, Perini et al. 2010), with Chrysocyon and Speothos forming a sister-clade to the monophyletic south American foxes and Atelocynus. On the basis of morphology, Zunino et al. (1995) reviewed previous work and also supported clustering species within the two previous paraphyletic genera (Pseudalopex, Lycalopex) into a single monophyletic genus. They further argued that Lycalopex had priority over Pseudalopex, subsequently also supported by Zrzavý et al. (2004: 324). The only outstanding question would have been whether Dusicyon would have been a more appropriate name, since Perini et al. (2010) reported a close relationship between L. culpaeus and Dusicyon. However, we now know that Dusicyon is far outside this clade (Slater et al. 2009, Austin et al. 2013). Based on this evidence, the genus Lycalopex is used over Pseudalopex for all South American foxes, following Wozencraft's (2005) earlier treatment.

The Sechuan Fox has a relatively limited range in the coastal zones of north-western Peru and south-western Ecuador. Currently, the population is estimated to number fewer than 15,000 mature individuals, and is thought likely to experience a continuing decline nearing 10% over the 10-12 years (three generations) largely as a result of ongoing habitat loss and degradation combined with persecution, and it is here provisionally listed as Near Threatened, based on approximating listing as threatened under criterion C1.

The Sechuran Fox can be found in the coastal zones of north-western Peru and south-western Ecuador, between about 3 and 12°S (Asa and Cossios 2004, Cossios 2009). In Ecuador, it has been observed in Manabi, Santa Elena, Guayas, El Oro, Azuay and Loja provinces (Tirira et al. 2011). In Peru, it is distributed on the western slope of the Andes between the frontier with Ecuador and Lima. Specimens that have been recorded further south may be the Chilla Lycalopex griseus or another species as yet undescribed (E. Vivar pers. comm). 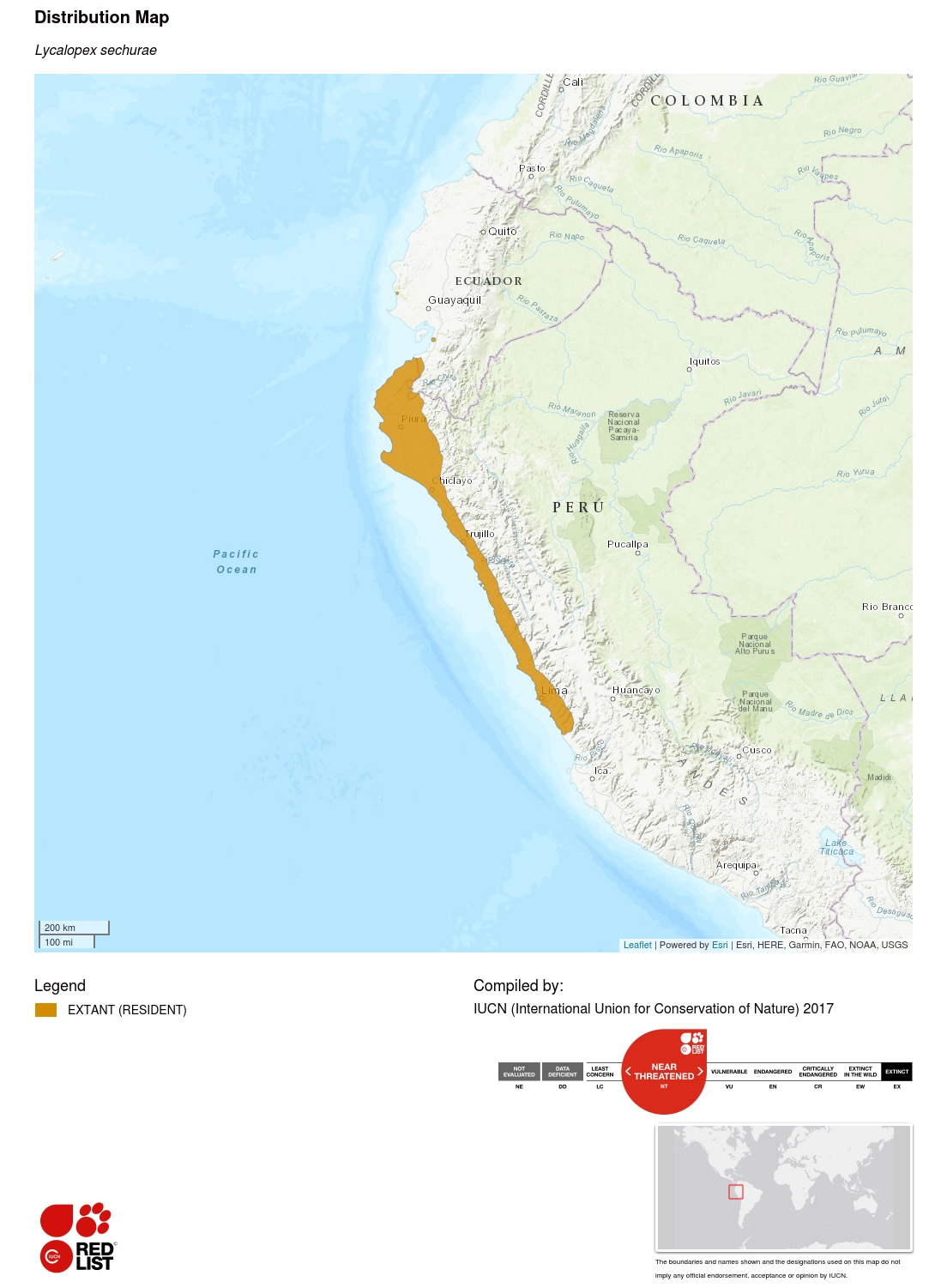 This species was judged by Grimwood (1969) as being abundant at the time and not in need of protection. The Sechuran Fox is uncommon in Ecuador, where it is considered to be in decline (Tirira et al. 2011). Asa et al. (2008) estimated the total population to number fewer than 15,000 mature individuals, but these numbers must be regarded with caution since they are supported by very little empirical data. Surveys based on footprints in Coto de Caza El Angolo in Piura, Peru, recorded an average of 12.6 foxes/km (CDC 1989) and an evaluation in San Pedro de Vice mangroves (Piura) estimated a population of 18-23 individuals in 3,013 ha (Chávez-Villavicencio et al. 2015), giving a population density of 0.6-0.76 individuals per km².

The Sechuran Fox occupies habitats ranging from sandy deserts with low plant density to agricultural lands and dry forests (Cabrera 1931, Huey 1969, Langguth 1975). The species is often observed in rural areas and disturbed environments from Piura department to La Libertad department in Peru. Occurs from sea-level to above 1,000 m, and perhaps as much as 2,000 m (Cossios 2009). It is an opportunistic omnivore, capable of being strictly vegetarian when necessary, and likely can survive with limited access to water (Cossios 2009).

The most important threats to this species are from the market for handicrafts and amulets and from persecution because of damage to livestock. In Peru, the typical attitude towards this species is one of persecution (68.3% of correspondents) or indifference (31.7%). The stated reasons for persecution were due to damage on domestic fowl and guinea pigs (65% of correspondents), the consumption of vegetal or stored goods (13.3%), and the belief of goat predation (10%) (Asa and Cossíos 2004). The Sechuran Fox also faces some pressure in agricultural zones and from urbanization and habitat degradation; indeed, habitat reduction or loss is considered the main threat to this species in Ecuador (Tirira 2001, Tirira et al. 2011).

Illegal sale of pups, of amulets made from body parts, and of handicrafts made from fur occurs principally in the markets of Tumbes, Chiclayo, Piura and Lima city in Peru. The most common type of handicraft made with fox parts consists of preserved adult animals in a "sitting" position. This activity is limited almost exclusively to the department of Piura. The practice of magic-religious rituals by shamans involving preserved Sechuran Fox specimens or parts is the principal human use of this species in Peru. The specimens are used to attract "good spirits" or "positive energies" during premonition rituals or to manufacture amulets (called seguros) with different purposes. Some shamans use also the Sechuran Fox's fat for the treatment of bronchial illness and stomach disorders (Asa and Cossíos 2004).

Legislation
Not included in the CITES Appendices. Currently listed nationally as Near Threatened in Peru and Vulnerable in Ecuador (Tirira et al. 2011).

Between 1975 and 2000, a governmental authorization was required to hunt the species in Peru. Since 2000, hunting outside the established areas and trade of the species has been prohibited. The police and the Ministry of Agriculture are responsible for the control of illegal trade. However, it has proven especially difficult to control trade in rural areas and in some cities.

Presence in protected areas
This species occurs in several protected areas in Ecuador and Peru. The Sechuran Fox was not traditionally protected, for cultural reasons, until recently. Now it is protected in Santa Catalina de Chongoyape, a rural community of Lambayeque department, because they are considered important for tourism and as seed dispersers (Asa and Cossios 2004).

Presence in captivity
Some specimens are kept in the authorized collections, including Parque de las Leyendas Zoo, Lima and Atocongo Zoo, Lima.

Gaps in knowledge
The main priorities for research include elaborating the southern extent of range and better defining altitudinal limits of distribution. In addition, there is limited knowledge of the impact of disease in this species.